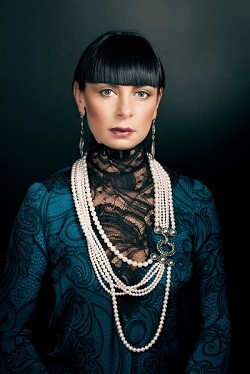 Famous pearls have left a mark in history. For a long time, they have fascinated mankind with their eerie luster and sophisticated beauty. They were worn by men and women alike, shining brightly in ballrooms, adorning emperors’ crowns and attire, being fought for, sought after and loved with a burning passion. Some cultures considered them to be the tears of angels, while others saw in them direct proof of the existence of divinity.

In order to truly understand pearls, we need to take a trip back on memory lane and try to figure out what magic and mystery lie beneath their luster that keeps everybody fascinated with them. You may now enjoy your unique black Tahitian necklace in multicolor pearls, but imagine what the person who discovered the Black Beauty pearl felt at the sight of the famous and precious gem. This is why today we will take a look at three of the most famous pearls in history and try to understand how they influenced the way we wear pearls today.

This famous pearl – a natural freshwater pearl with a pink hue – was discovered in the River Tay in Scotland in 1967. Its importance resides in its quality: it is a 44-grain natural gem that has been deemed “perfect” by specialists. Another novelty factor related to the pearl is the fact that it was discovered in Scotland. Professional pearl diver Bill Abernathy found it in an odd-shaped mussel, quite common to River Tay.

However, even if Scottish rivers were abundant with high-quality gems, the Industrial Revolution managed to pollute the waters and extensively damage the prized pearl producing mussel populations. In other words, the Abernathy gem – known as The Little Willie Pearl – is a rarity in and out of itself.

Abernathy didn’t keep the pearl for himself. The gem was displayed for almost 30 years in a jewelry store in the town of Cairncross, but it was sold in 1992 to an undisclosed buyer for an undisclosed sum. It weighed 93 grains and was about 2200mm.

The luster and nacre led people to believe they could actually look through the pearl and not at it, while its size is indeed one of a kind in the pearl industry. A pearl such as this one sparked people’s imagination and it surely made its kind even more popular than they already were. It is safe to assume that today’s oversized pearl pieces draw their inspiration from the Abernathy.

It’s one of the most famous pearls in the world. You surely have heard about the Hope Diamond, a stone surrounded by mystery, passion, and plenty of rumors, but the Hope Pearl is not less famous. This is perhaps the largest and most famous natural saltwater pearl ever discovered – and one of the most bizarre, beautiful and exquisite pieces of jewelry in existence. The pearl is a drop-shaped baroque blister gem, measuring around 2×4 inches and weighing 1,800 grains (almost 4 ounces). Besides sporting 450 karats, it’s incredibly special due to its luster and bronze, ranging in color from greenish-gold at the bottom to white at the top.

Henry Philip Hope, the former one-time owner of the Hope Diamond, renounced the pearl. Today, the gem is a permanent resident of the British Museum of Natural History – and can be admired in its outstanding royal montage.

It is possible that the Hope Pearl set the tone for an unprecedented popularity of baroque pearl jewelry pieces, especially the baroque drop earrings bearing the fascinating beauty of the Hope gem and making any woman wearing them stand out of the crowd.

Known as The Pilgrim or the Wanderer (not be mistaken for La Pellegrina) is still one of the most famous pearls in past and present history. The gem was discovered off the coast of Panama in the 16th century, and it was presented to King Phillip II of Spain. As we said before, back in the day, men (royalty, high military officials, ambassadors, etc.) were wearing pearls as a status of social position, wealth, power, and wisdom. King Phillip however, gifted the pearl to his newly wedded bride Queen Mary of Spain.

The pearl is said to have been found by African slaves in the waters off The Pearl Islands of Panama. Its uniqueness resides in the fact that it is one of the most symmetrical and perfect-shaped in the world. La Peregrina is pear-shaped, weighing 223.8 grains (almost 56 karats) and by the time, it was discovered it was the largest pearl ever found in the world. Its path, however, didn’t stop with Queen Mary.

The Famous Fate of La Peregrina

After her death, the pearl entered the Crown of Spain collection and was worn by subsequent queens: Margaret of Austria, Elisabeth of France, and Mariana of Austria.

King of Spain Joseph Bonaparte left the pearl to his nephew, future Napoleon Bonaparte III of France. It was lost and found twice in recent times, ending up in Sotheby’s in London in 1969. After that, Richard Burton bought the pearl for his wife Elizabeth Taylor (during their first marriage) as a Valentine’s Day gift.

Famous actress Liz Taylor, a passionate advocate for pearls and jewelry, wore it on a pearl necklace montage together with others, diamonds, and rubies. The necklace has been sold in an auction at Christie’s in New York as a part of Taylor’s collection for a record price of almost $11 million. It boosted the gem’s status as one of the most famous pearls that also amounted to quite a fortune.

La Peregrina proved once and for all that pearls could and should be part of any woman’s jewelry collection. Moreover, the daring montage promoted by Liz Taylor convinced fashion designers and jewelers to get as creative as they could. This is why today we have diamond-styled pearl jewelry pieces becoming a staple of elegant, sophisticated and visionary women.

These little natural gems have made a breathtaking comeback in the fashion world as of late, regaining their rightful place among the most precious possessions of mankind. Today, we see pearls mixed with diamonds and other gemstones, adding their subtle charm to wedding dresses, evening gowns, and even casual outfits, proving once and for all that pearls are timeless – true bits of divinity left for us mortals here to love.