Today, Australia is the preeminent culturing center of South Sea pearls. Indonesia and the Philippines contribute a small but increasing portion of the South Sea pearl production. The pearls themselves are largest of the cultured pearls in the fine jewelry market at an average size of 13mm.

Pearls Oyster
South Sea pearls are cultured with the silver and golden lipped oysters. The scientific name for these oysters is Pinctada maxima. In Australia, the majority of oysters are collected in the wild. There are strict rules and quotas allotted to each company. In addition, oysters under the age of two years and measuring under 12 cm are not allowed to be taken.
Divers collect oysters between February and July. In Indonesia and the Philippines, the majority of the oysters are bred in hatcheries. The hatchery oysters tend to be smaller and may produce smaller pearls. 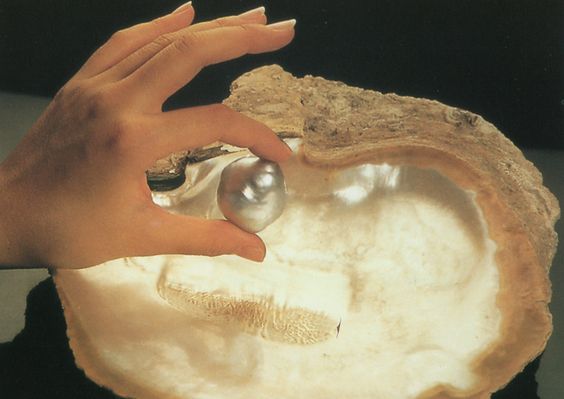 
Pearls Nucleation
In Australia, the oysters are carefully stored at sea. Then, between March and December, they are nucleated. Some nucleate in a clean-room aboard an onsite boat. This allows the oysters to be quickly returned to their environment. As a group, the Japanese are still the most proficient at nucleation. Their skilled and precise work yields the highest quality cultured pearls. The oysters take a few weeks to recuperate and during this time, they are hand turned to facilitate a rounder and symmetrical pearl. In the Philippines the nucleation occurs between June through November.

South Sea Pearls Growth
After nucleation, the oysters are returned to the water where they will be nurtured during the growth process. In Australia, the oysters are carefully tended to for the next two years. In Indonesia, the warmer temperature allows for faster nacre deposit so it may take about 18 months. Farm sites are chosen to protect the nucleated oysters from pollution, storms and other elements that will cause harm. Adequate depth and plankton quality are also important.

Harvesting South Sea Pearls
Australian pearl farms harvest from June through August at the time when water temperatures are coldest in the southern hemisphere. Most of Australia's pearls are white or near white. Their size range is between 10 mm to 20 mm. More of the Indonesian cultured South Sea pearl harvest is golden and creamy colored and their range is between 8 mm to 13 mm.
The farmers of the Philippines harvest both colors and their size range is about 9mm to 20mm. During harvest, an oyster can be nucleated again. The oyster can generate more pearls this way, with each succeeding pearl larger than the previous. However, the quality may be decreased with each pearl.

Processing South Sea Pearls
In Australia, the pearls are simply washed, sorted then graded. No other processing or treatments are carried out prior to export.