The value of Freshwater pearls and finished jewelry can vary based on specific factors such as roundness, luster, size, surface quality and color. As the pearls are nucleated with only tissue, they are 100% nacre. Pearl matching for finished jewelry pieces is also very important.

Another very important value factor is the pearl's luster. The shine or luster of a pearl is defined as how well the pearl reflects light. One way to think about luster is to imagine a pearl as a mirror. The more light reflected and clearer the image, the better is a the pearl's luster. The luster of a freshwater pearl may be different from that of one created in saltwater. Freshwater pearls have a shine similar to that of satin. Similar to Akoya, a smaller pearl with better luster will appear larger. Also, a more lustrous pearl will appear rounder and blemishes will be less noticeable.
Pearl Grading Page

Another pearl value factor is the cleanliness of the body or surface of the pearl. The less visible spotting, the more valuable the pearl. Pearls are a naturally formed organic gem so some minor surfaces blemishes are perfectly acceptable.
Pearl Grading Page

The size of the pearl also effects the value. A larger pearl with similar other value factors will be more valuable than a smaller one. However, there is a size range where values increase exponentially. Freshwater pearls average between 6mm to 7mm. As a result, pearls at or under that size range are more readily available. When the size range increases to 7mm to 8mm, subsequent 8mm to 9mm and greater than 9mm+ ranges, the value increases dramatically.
Pearl Grading Page 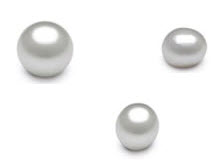 As cultured freshwater pearls are tissue nucleated, only about two percent of any given harvest is round. As a result, roundness is one of the most important factors in the evaluation of freshwater pearls. The most round Freshwater pearls have a shape that can rival those of Akoya cultured pearls.
Pearl Grading Page

Freshwater Matching
The pearls in a jewelry piece should be well matched in color, size and quality. For freshwater pearls, with their varying natural colors, color matching is very important. For a set, the pearls within each piece should match and the pearls of different pieces should be matched as well. For example, the earrings should match the necklace and bracelet. This is also true for pendant and earring set matching as well. As a result acquiring the entire set at the same time is preferred as it can be difficult to match later on.